Announcing The Coroner Saga and more! 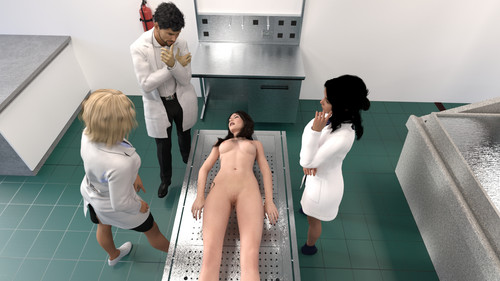 As promised today I want to share some big news with you: the upcoming release of a new Bruni Multimedia project - The Coroner Saga.

This is a separate project from General Practitioner, a different team of few but very dedicated people are actually working on it so this isn't going to change the scheduled release of General Practitioner in any way (by the way, you can take a look at the game's roadmap here.

What is The Coroner Saga (TCS)? It's an otome Visual Novel, a smaller project compared to General Practitioner and an episodic-release one as well. Each "Season" of TCS will be made of 6 episodes, each varying in gameplay lenght of about 5-6 hours and with many different romance options and endings.

It is also a very interesting and well written story, having award-winner author JD Glass as Lead Writer for the project (someone might recognize her from her work on Voltage Entertainment's Visual Novels as well as many other works).

Sara is a young doctor who just completed Med School with the highest degrees. Uncertain about her future she joins the Coroners' State Institute and the adventure begins!

Written by award winner writer JD Glass, author of American Library Association (Stonewall) and Lambda Literary Award (Literature) finalist Punk Like Me, Punk And Zen, Lambda Literary Award and Ben Franklin Award finalist Red Light, GCLS finalist American Goth, and the critically acclaimed X; selection editor (and contributor) of GCLS Award winning anthology Outsiders, listed on the Advocate’s Top 100 for CORE, Vol.1 Iss.1., the well-received First Blood, GCLS finalist Nocturnes, and the fan-awaited Glass Lions. Called by some the voice of a generation and the erotic philosopher by others, JD works in often familiar-seeming worlds, with people we know, people like ourselves, people we’d like to meet, and provides powerful stories that allow the reader to rejoice and wonder, stumble and fall, then rejoice victoriously again at the amazing experience of being human.

6 different murder cases to solve. Each case will have you work in a simulation-minigame to find the correct clues. Those of you who are familiar with General Practitioner's examinations will feel comfortable with easily recognizable mechanics!

You decide your own fate

As with all Bruni Multimedia's videogames choices are the most important thing: will you pursue your career without any distraction or will you let your personal life to interfere with your dream to become a world-renown Coroner? Each choice will have consequences in the current episode or in future episodes. You can replay the game as much as you wish to try out every different combination and outcomes!

The Coroner Saga will start releasing its first season on April 2019. Each season is made of 6 episodes and each episode's duration is about 5-6 hours in gameplay.

The game's replayability gives you the chance to start over and face completely new situations.

The Coroner Saga is an episodic Visual Novel which will have you deal with Sara's personal and professional life as well. Meet new people, interact with colleagues and fellow doctors and uncover the truth behind several murder cases throughout the game's season.

Developed in 1920x1080 resolution, The Coroner Saga's graphic is stunningly beautiful to look at.

The game features a full 10-track original score you won't hear anywhere else.

There's a news about our website as well! Take a look to discover what has changed and explore the two new websites we made to keep each project separated:

TCS is already on itch.io, so you can follow it right on! It won't be released as an Early Access game, it will be a full release right from the beginning. Release date is set for April but more informations will be released in the upcoming weeks.

Thank you for following us and our projects, we are very proud of our small but dedicated fan community and we wish you to always be safe and healthy!

PS: exciting news for General Practitioner are coming as well in a few hours: stay tuned!