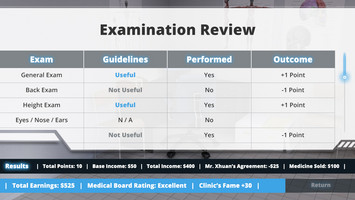 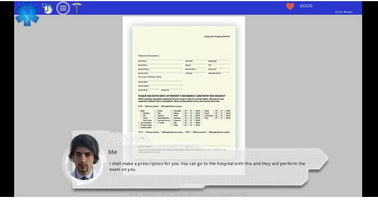 One of the most challenging albeit both entertaining and rewarding parts of developing a game is to listen to the player's feedback about everything. And I usually take requests very seriously as in the case I'm announcing you today.

In a few days I will complete an extensive overhaul (one of many which I already did and I will do in the future as well) of the Medical Examinations. Since this is one of the main features of the game it's quite obvious that it's going to take a deeper development and big improvements over time.

As you can see in the picture above the boring wall of texts which were present during the final review of the exam are going to be replaced by this screen, where you will be able to see every examination available in the game and its outcome.

There's also a section to display points earned, your base income and total one, how much the agreement with Mr. Xhuan is going to cost you and how much you earned selling medicines yourself. Last section shows the Medical Board rating for the exam and the clinic's fame you lost or gained.

But that's not all.

One of the major complaints I receive are that without the proper equipment most exams fail and the player has no way to pre-determine this and to act in advance. This was originally intended to work like this as it would've simulated the damage occurred to the clinic by a lack of equipment and personnel, but I heard you when you said it was way too punishing for the player.

Starting from the "Review screen" update (in 0.0.19 before it's final release) you will now be able to perform each exam even if you don't have the proper equipment for it. The game will have you refer the patient to an external clinic/hospital. Of course you will lose some trust from the patient as she will be disappointed about the lack of equipment of the clinic but it won't affect your fame nor the outcome of the exam.

These changes are huge since I had to make them on all 50 released examinations, but I think they are a necessary addition which will add to the fun and entertainment of the whole General Practitioner experience.