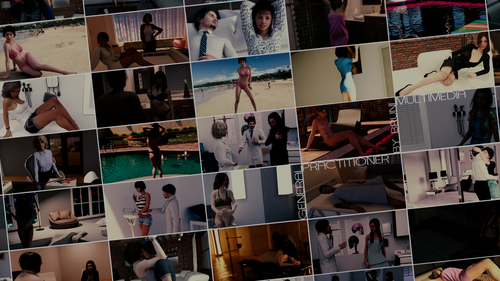 This update is COMPATIBLE with saved games from 0.0.11 public release and later.

An USER INTERFACE update is in progress. You will see the new interface in Menus and Load/Save screens, other than in dialogues.
Already done:
- Main Menu
- Load/Save
- Help
- Dialogues
- Exam Interface
- Conversation Choices
- Settings Screen

To do (forgive is they look bad and incomplete, it's temporary):
- Codex (all)
- Gallery

* Bug fixing
* Fixed dialogue with your relative calling you with her own name instead of yours
* Fixed Morgan's exam. He won't appear naked when talking to him anymore.
* Fixed Anne's exam which, in some cases, switched to Morgan's
* Fixed Children Random Exams which crashed during Blood Tests
* Fixed Male Children addressed as "She" while examining them in random exams
* Fixed an issue with calendar getting wrong date after the interview with the new staff members
* Fixed an issue decreasing your wage for not attending to the hospital while players weren't meant to be able to
* Fixed Children Random Exam with a wrong picture displayed for a specific patient type
* Adapted the script to fit Ren'Py's 6.99.14.3 release
- This fixes the "dialogue box" appearing when no character was talking
- This also fixes fading and dissolving effects sometimes repeating themselves twice
* Bob now gives you the money he promises if you accept to bring your relative with you
* Fixed an issue with Chloe's exam not showing the correct choices
* Fixed an issue where Erika's sex scenes were replaced by Rita's
* Fixed some crashes in Stephany and Kathlyn's examinations
* Fixed an issue with Rita's date at the cinema showing the pool instead
* Typo fixes here and there

GAMEPLAY:
* Added Rita as your potential roommate. You can only have one roommate at any given time in the game.
- Conversations with Rita as your roommate are available when choosing "Stay at home" and then "Relax" in the daily chooser.
* Added sex scenes with Rita and Erika
- 18 new sex scenes are available for Rita
- 23 new sex scenes are available for Erika
- 30 new different conversation lines are available for both girls while having sex
- 50 new sexual descriptions are available when having sex
- You can randomly access Rita's sex scenes while living with her and choosing "Relax" when staying home
- Some scripted conversations will have you have sex with her too
- At night if one of the girls is your girlfriend you have a random chance to have sex with them.
- This content is available in "STORY MODE" only
* A new Pharmacy is available at the clinic! Pharmacy will unlock in September, a text will tell the player if it isn't available yet.
- Even if you don't choose to build the pharmacy the event will trigger again every time you choose it.
- After building a pharmacy some specific clinical cases will open up. Upon completion they will either grant you money, fame or will have you decrease your integrity.
* 2 Pharmacy Clinical Cases Have been included
* 5 new "Study" cases have been added

OTHER:
* The game will end on September 10th. Full version of the game will cover an additional 10 months.

Known issues:
* "Energy" stat while present is not used in the game yet, but it will become on future updates.
* "After-exam" sexy scenes for story mode are in development