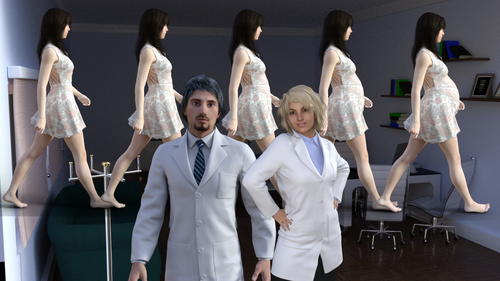 This update is NOT COMPATIBLE with any previous saved game, since many things have been re-done. It is recommended to extract the zip on a completely new folder and start a new game, since older saves may cause the game to have problems

An USER INTERFACE update is in progress. You will see the new interface in Menus and Load/Save screens, other than in dialogues.

To do (forgive is they look bad and incomplete, it's temporary):

* Medical Examination's tooltips have been redesigned, their text changed with a more correct one.

* GAIT symbol in examinations has been changed

* Added Elisa as your potential roommate. You can only have one roommate at any given time in the game.

- Made some minor changes to dialogues with Nurse Lawley

* Each Examination in the game has been reviewed for inconsistencies, bugs and to include the new medical exam interface

* Choices and Consequences story chapter will have you deal with previously made choices regarding Elisa, who might be or not your love interest. Whether she is or not the story will play regardless, with changes in dialogues, endings and other gameplay elements.

- The story chapter will automatically start on August 13th when the day starts, so you can't miss it!

- Depending on your choices and actions you can unlock up to three different endings, that will have repercussions over the next updates

* The game will end on August 31st. Full version of the game will cover an additional 10 months.

* "Energy" stat while present is not used in the game yet, but it will become on future updates.

* "After-exam" sexy scenes for story mode are in development