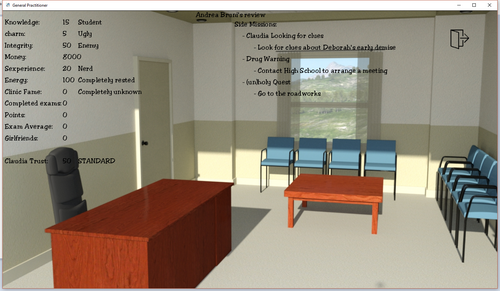 0.0.11 will feature a new way to end Father Torque's quest (which it's still to be implemented in the game). While writing story arcs I always wanted to make some new gameplay elements for those of you who don't like or don't get enough fun from medical exams.

So I'm developing some new "Side-Missions" (or "quests") which will be shown in the game's review screen (which graphic is temporary since it's being re-done by our graphic designer as well as the other game visual elements).

0.0.11 will introduce you some of these "Side-Missions". They won't be available right now but they will be introduced in the following updates, as I always strive do to. Some side missions are easily found, others might need you to follow certain paths or dialogue options, but all will feature some steps (clearly visible in the game menu) to perform and rewards as well!

This is yet another gameplay opportunity in the game, which adds to the medical exams, the in-development Random Exams Project, the "Study" minigames, the "Gym" minigames and the "Live Together" minigames.

If you look at all those from a wider range you can see that in the final game each gameday will have plenty of opportunities for the MC to explore, so empty days gap are being filled over and over until they won't represent the majority of the game. Full game will cover 365 days of the Doctor's life and thus about 1095 players' choices, I want to make sure no "turn" gets lost in a black screen with a simple line of text.

Please allow me some more time to include this elements, the game is getting bigger, bugs are getting smaller and your help is as always has been envaluable!

Thank you for following my game and updates. I hope you'll have more and more fun with General Practitioner as I'm having developing it.