Fun in the gym 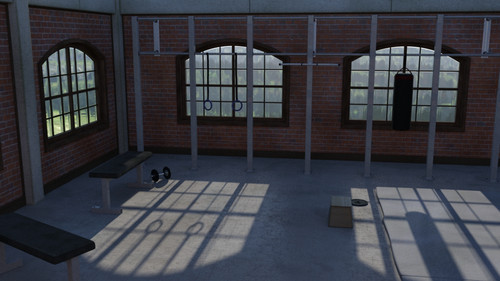 Released in 0.0.10b next Tuesday will be the "Gym Random Encounters". The gym mechanic itself will be modified.

How will they work?

Each time you go to the gym in game you earn 1 to 5 fitness points. Fitness is a new stat in the game and will be quite useful for your success in late-game difficult examinations, and also to meet certain objectives.

Also, when going to the gym there will be a 35% chance to meet one out of five new characters who attend the gym. You can either increase or decrease that chance by buying certain items in the item shop.

Depending on the character they will be interested in something in particular, while giving you the chance to earn something else.

Let's take Daniel for example. Whenever you find him at the gym he will talk to you about charme and fashion. He will pose you a "challenge" randomly chosen from 5 different difficulty levels. It's up to you to learn by trial and error if you're ready to challenge him.

If your charme is high enough you will be rewarded with "fame" for your clinic. The number of points earned will vary depending on the difficulty of the challenge itself. If it is not your own charme will decrease by 5 points. It's always up to you to accept or decline the "challenge".

The characters you can meet are the following ones. Others may be added to the game in future updates:

If you beat the fifth and most difficult challenge you will unlock a special event with each character. This though will be included in a future update.

I hope you'll have much fun with this new addition to the game!

Be safe and healthy!